Just a little excursion to make some sheep dog whistles...


Finding myself with plenty of time to make things today, I chose to spend a little more time in my workshop making some simple sheepdog whistles from some seasoned wood that I had cut from a Holly tree a couple of years ago. I had been keeping the word, in fact, it was in a log form, nice and dry and virtually forgotten about. Nevertheless, after successfully making similar whistles out of mahogany in the past, I did the same thing again in preparation for the up and coming Holmfirth sheepdog trials in June/July. 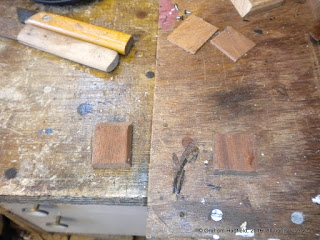 Using the existing mahogany sheepdog whistle as a template, that I made some years ago, I marked out the wood and correspondingly cut it with a coping saw.

This formed the outline of the whistle.

A slot was then cut cleanly and accurately using a tenon saw, which provides a perfect gap for the top and bottom plates of the whistle. I believe it is these two plates vibrating in unison with the passing through of a finely balanced rush of air, together with the correct placement of the tongue, to produce the inimitable and unmistakable sound of the whistles used by local farmers to control their sheepdogs. 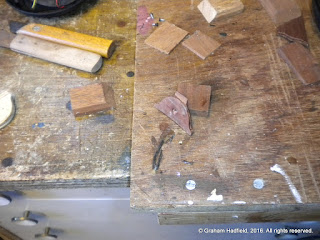 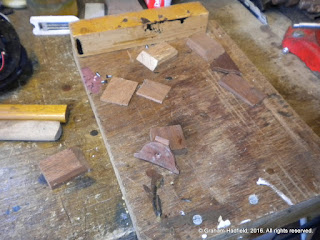 The mahogany version shown here is at least five or six years old and makes a beautiful high-pitched, yet nicely timbered (yes you heard that right, timbered) sound. I think that these wooden whistles are quite unique as only plastic ones or aluminium versions are available on the market, but this wooden style produces a much more flute-like, pure sound.

Posted by Graham Hadfield at 22:45