The purpose of this essay (and a series of subsequent essays to be submitted within this module), is to summarise a selected number of key contemporary theoretical themes and/or keywords, to enable me to articulate my own artistic practice, whilst placing my actual art works within a relationship between “idea and practice”.
Problem Definition; The role of Affect Theory, Emotional Grief and Loss, as explored in The works of The New European Painters


Outline Synopsis for a dissertation essay.

My initial thoughts are directly related to my current themes of painting outputs and the affects that may be triggered through recognition of everyday objects (together with its own aesthetic appeal).
I am developing a series of works entitled “Things Left Behind” which explores how we deal and think of the notions of emotional attachment to things in general.  These ‘things’ can be tangible or intangible.  I also want to touch upon the philosophical idea of Heidegger’s hammer, and the notion that an object or entity (like a hammer), only comes into importance (existence / ‘being’) when we [don’t have it /] need it. Therefore, it is only later, when the entity or objects is ‘not’ there, that we come to understand our need for it.  I have paraphrased this theory somewhat, but Heidegger’s metaphor, I believe, can be applied to our inbuilt sense of yearning of “things left behind”, and the sense of loss, and grief.
This enquiry comes subsequent to a number of studies and Gallery visits that I made during my summer vacation, which explored the ideas of loss and how we deal with change, loss and grief as human beings.  I’m particularly interested in the emotional phases that each of us go through, not only when we lose a personal item which may have sentimental value, such as a watch or a wedding ring or other personal artifact, but also more significant loss, such as the loss of a loved one or relative.  I have not limited the idea of loss (and the effect that it has upon us), to just those important areas, because we all also express similar emotions, ‘as a process’, even when we lose more superfluous “everyday” objects , or indeed intangible items, (like a job or an argument).
In large part, this interest has been influenced by my recent study of Anselm Kiefer (b. 1945 - ), the German contemporary artist, whom, since the late 1960s, has been exploring the idea of shared national guilt, and the grieving process of a whole generation of the post-Second World War (that generation being of his parents age, and to some degree, the transition to the subsequent generations of the 1960s, and 70s).  His own investigation started whilst Kiefer was still in art school, through a series of works, based on photographs of himself, in various settings all over Europe, making a ‘Nazi’ salute. This series of works was called “Occupations”.

Kiefer’s confrontational Nazi salute was extremely courageous and, in my humble opinion, clearly about the artist taking a sacrificial, yet calculated, risk. In performing these gestures in the series of photographs and later as paintings, I think his intentions were deeper than just simple artistic provocation, but a massive and repeated statement to ‘wake up’ the whole of the German psyche, in an attempt to encourage some form of an ‘opening’, in the peoples’ minds, for that ‘grief acceptance’ process (that I mentioned earlier) to start. The time (i.e. late 1960s) was right for Kiefer to make this move. 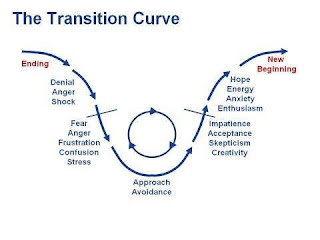 (Having studied Business Change and Transition management for much of my professional career prior to my immersion into Contemporary Art, I am drawing on that experience again here).


It is uncertain whether this motivational drive of Kiefer, in his wish to engage not only Germany, but perhaps the whole of the western Europe, [in the process of a grief ‘transition’ (Bridges, 2009 (3rd Edition)), (see diagram above)] to a new collective state of mind (i.e. ‘acceptance’), stemmed originally from a subliminal sense of guilt in Kiefer (i.e. driven by the ‘true’ processes of grief) (Worden, 2010 (4th Edition)), 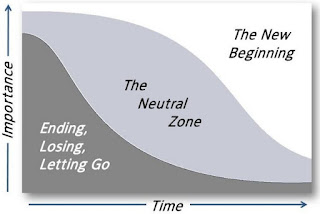 or a conscious collective engagement of the younger German generation, those whom were born into a period of the deep sense of collective guilt (for their parents, it was a ‘reality’ being displayed by their mother nation), during their maturation to adulthood from the late 1940s, through the 1950s and 60s.


"Multiple ways of interpreting experiences are available to each of us through interacting with others, and that it is the meaning of our experiences that constitutes reality. Reality, consequently, is 'socially constructed'" (Bogdan & Biklen, 2002 (4th Edition)).

Either way, it set Kiefer of a path of contemplation that seems to have remained with him for the last 50+ years.
Likewise, I strongly believe that an artistic exploration of the various complex facets of “things left behind”, which include temporary and permanent loss, the emotional relationships, affect and corresponding grief, will make a rich source of study and research, and even more importantly, a mechanism towards stimulating objects and entities of interest for my own creative art, - not only for the rest of my degree studies, but likely, for many years to come afterwards, -particularly as I transition out of the academic environment into becoming a full practicing professional artist.