The tragic life events of Egon Schiele seem to be a particularly interesting series of tumultuous and traumatic "sculptural" blows to a highly gifted and skilled artist who at the dawn of the 20th century, died at the tender age of 28, and yet perhaps set in motion some of the most important styles of influence to contemporary art through the next century and into this millennium.

His early childhood was initially rocked by the death of his father, a station master in the Austrian town of Tulln, where he lived with his three siblings. Schiele lost his father in early adolescence at age 15, and it appears that this significant bereavement caused him to reflect on his own grief for the remainder of his life, which lasted less than 13 years after the extremely difficult time, when the young Egon had to witness the steady deterioration of his father, due to a worsening of mental stability and insanity (after he contracted syphilis, prior to marrying Egon's mother).

The resultant output of art from Schiele, whilst clearly influenced by his mentor Gustaf Klimt, seems to hold particularly disturbed and some may argue rather twisted movements of brushstrokes or pencil, in almost all of the subjects that Schiele chose for his objects of representation, the most famous of which are Schiele's figurative works.

Whilst he is mainly celebrated for his unique style of capturing an image in a radical gesture of the nude, his other works also reflect, what I believe to be a deep sadness within the mind of young Egon. It seems that he was tortured mentally in many ways;  in his relationship with his mother, with relationships later with his models and possibly lovers, and finally with his wife, Edith Halms, whom he married in June 1915.  After only four days of marriage, Egon Schiele was requested to sign up for Army service. 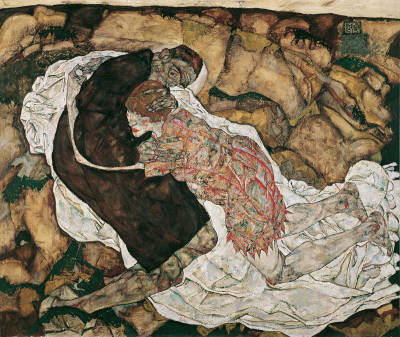 Image; - Courtesy of the Royal Academy
(* PLEASE DO NOT COPY * - for personal research purposes only).

He had already built up a strong and successful reputation as a flourishing young artist, at the age of 25, and spent the next few years transferring Russian prisoners of war to and from Vienna. He was therefore able to continue to some degree as an artist, and was later posted back to Vienna in what seems quite a comfortable position for a military serviceman.  Indeed so much so that he was actively encouraged by the military leaders of the time, as he was recognised as perhaps one of the most promising young artists throughout the whole of Austria and Europe during the second half of the First World War. As a result he was given permission and asked to take part in a number of exhibitions to politically assist with the relationship being built between Germany Austria and the Scandinavian countries.