My next area of interest beyond the two-dimensional paintings using Plaster of Paris as a substrate suspended within the acrylic paint itself produced some interesting results last week. 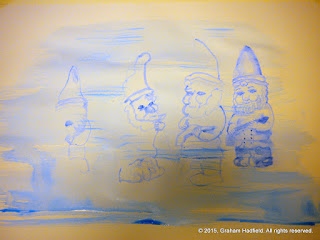 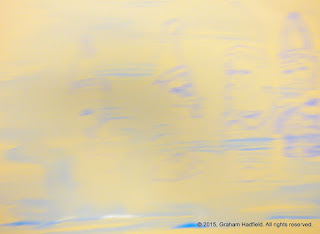 Whilst doodling and creating a water-based image of fading gnomes slowly disappearing through a hazy blue mist of memories I was able to lose myself and thought and come up with a further idea of expression which I will outline below.

I'm keen to explore further how I can represent my idea of "things left behind" and continue to use a simple object as a garden gnome as a metaphor. I have therefore embarked upon making a series of copies of garden gnomes as taken from the original smashed item, which I rebuilt during my summer holidays into an object that was "as good if not better than new".  At the beginning of the week I started this little investigation. 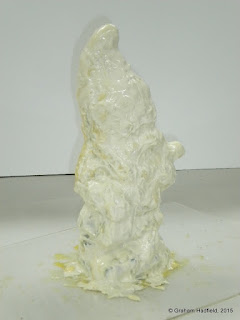 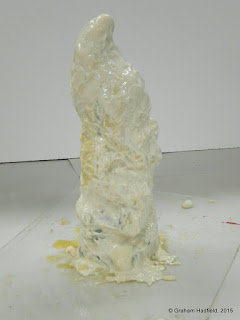 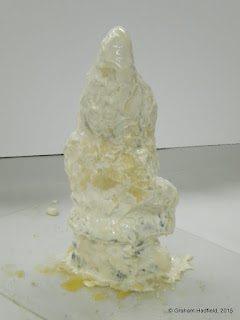 My garden gnome has therefore been covered in a layer of latex. I will repeat an application of latex to provide sufficient layers in order to create a mould. This flexible mould will need additional support and my method of providing the support will be through a casting method known as using "a mother mould".

(One day later...)  This mother mould will be made from Plaster of Paris. 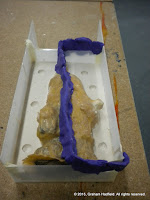 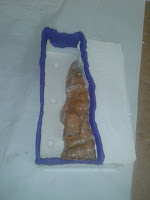 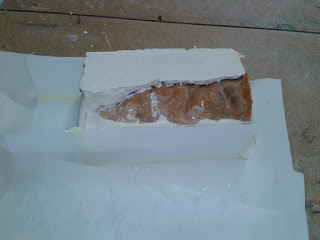 The moulding process will require a number of steps where each casting will be required to dry. As the cast will need to be removed from the latex in the mould, a series of locator lugs will need to be incorporated into the first base mould.

Once the base mould was dry, I coated the surface with a mixture of paraffin jelly to stop the next player from sticking to it. I also divided the latex mould from the future fourth quadrant by using a plasticine barrier which was laid laterally on the surface of my garden gnome. Wonderful casting process was complete I was then able again to use a layer of paraffin jelly between the third quadrant and the final quadrant of the mould.

Day 5...
I have then left the combination mould to dry for the remainder of the week / weekend.....

Conclusions;
Early stages yet, but I think that this might be a good exercise.  It is quite time consuming, but I have been able to do other things, including my formative assessment preparation this week.
I have learned some very useful techniques this week about double moulding and casting, although I do have some previous experience of making lead / metal casting using clay moulds in the past.  The use of a flexible latex inner mould and mother mould is new to me, and I'm looking forward to seeing early results!